Cosmetic Specialties is a custom package company serving the cosmetics and personal care industry in Oxnard, California. With 37 injection molding machines, 135 active mold bases and 276 sets of inserts, efficiencies – or inefficiencies – in the tool room have a significant opportunity to affect quality, delivery times and bottom-line profitability.

When Chris Gedwed became chief operating officer in 2011, production efficiencies were trending down and operating costs were up. Lead times were increasing, cavitation and run rates were decreasing, scrap was going up, machine downtime was up and overtime costs were rising. In addition, the customers were seeing the effects in the product, resulting in returned shipments. Attention turned to the tool room.

“We tried to pinpoint the problem, but we had too much scattered data,” said Gedwed. “For example, we had a mold that was causing production issues, so I wanted to find out how many hours and how much money we’d put into fixing the mold. It took two hours to find that data, and with 135 mold bases, that’s too much time.”

In 2011, Cosmetic Specialties was experiencing an average of 15 unscheduled mold stops per week. In addition, there was an increased number of mold returns. Molds were leaving the tool shop to be put into injection molding machines, but were not running correctly. Finger pointing and frustration resulted.

However, there was no systematic way to report the issues, and no consistent procedures for the process technicians and tool room technicians to identify the problem and communicate it. Without data on the reoccurring mold issues, there was no way to understand how much money and time were being wasted. And, without that understanding, it was difficult for anyone in the tool room to feel ownership in what happened once the tool left the area.

Part of the problem was a constantly changing landscape. “In our business, the market was changing and our customers were evolving,” said Gedwed. “Our mix of business had changed, moving from a provider of stock products to a more custom business. Runs were smaller and shorter, which led to more changeovers and additional pressure on the tool room. Shorter lead times created a just-in-time mentality, with product being shipped out the door as it was coming off the line. We also had transitioned from building molds to maintaining them when our customers asked us to run more proprietary molds. It brought a lot of stress to the organization, because it exposed performance issues and limitations that we had in our tool room.”

Those issues translated into a negative effect on profitability. In 2009, tooling maintenance and repair costs were under $165,000, but by 2011, costs had increased more than $28,000 to over $193,000. Most importantly, 37 percent of the costs over those three years were for unscheduled mold repairs and only 19 percent was attributed to preventative maintenance and cleaning.

Cosmetic Specialties needed to find a sustainable, long-term solution. “It was time to be more proactive and less reactive,” Gedwed explained, “and, that meant we needed a centralized location for all data collection. This would allow us to improve communication between the mold floor and the tool room, and it also would help us track money spent on maintenance and repairs.”

A strict preventative maintenance schedule was established to support production, and that led to greater visibility into the molds that were most problematic. Visibility, however, was only the first step. “We needed a systematic approach to mold maintenance and documentation that would allow us to deal with every mold the same way each and every time it needed attention,” he said. The company consulted with several organizations before choosing software from ToolingDocs to track mold data.

Once a system had been identified for collecting and monitoring data, the rollout began. “First and foremost, I had to identify those who wanted to embrace change and those who did not,” Gedwed explained. “The employees who were not willing to move forward are no longer with the company, but we had many employees who stepped up.” With everyone on board, standardized training ensured all employees had the same knowledge base and understanding of how the processes needed to work. The shop layout was improved and the tool room area was organized to make necessary items more easily available for maintenance and repair activities. In addition, new benchmarks were created for mold performance and maintenance efficiency key performance indicators (KPIs).

“We had to take ownership of what was going on in the tool room,” said Gedwed. “There was a breakdown in communication between the production floor and the tool room – both in terms of what the problems were with each mold and how those problems should be fixed.” A two-step process was implemented – first, a systematic approach for reporting the defect was created wherein the location of the defect was listed first and the defect listed second. Technicians also were asked to open the mold and collect last shots for inspection. Once reports came back, the tool room followed a seven-step process for repair, performing those steps the same way each time so when an issue needed to be addressed, there was a system to help correctly identify the defect.

“The implementation was difficult,” admitted Gedwed, “because we hadn’t previously enforced the need to collect last shots or asked for documentation. There was a lot of concern about the time required for those things, and it was my job to spend time on the floor every day to make sure the process was followed. It was my job to bring the two sides together, making sure the process technicians understood that the communication was critical and that the mold technicians were following the seven-step process each and every time.”

Improving the communication system and data collection were not processes that happened overnight. Much of the Cosmetic Specialties workforce does not speak English as its first language, and it was a challenge to teach every employee to use the same terminology. “It took nearly 18 months before I felt confident that the data was complete and I didn’t need to inspect it every day, so there were growing pains,” Gedwed explained. “However, improvement was seen from the beginning because even slightly improved communication was much better than what it had been.”

In the end, company leaders had to set the example and the employees had to feel ownership in the results. “Consultants can come in all day, every day to tell you what you should do and how to improve,” Gedwed said. “They bring great information and solid resources, but then they leave. It’s up to us as leaders to make it happen – to implement what has been taught to us.”

In 2012, Cosmetic Specialties saw an instant drop of more than $60,000 in tooling maintenance and repair costs. That improvement has continued and, in 2014, tooling maintenance and repair costs were only $79,000 – a massive change in only three years. Over that time, preventative maintenance and cleaning activities increased to 25 percent of the overall costs, and unscheduled mold repairs dropped to 31 percent of the cost breakdown. “In our business, there will always be unscheduled mold issues that have to be dealt with,” Gedwed said, “but, if we can be proactive in how the molds are maintained, it’s possible to reduce the costs associated with that unscheduled activity. We now have approximately six unscheduled mold stops per week, rather than 15, and the costs have dropped dramatically.”

In three years, the injection molding company was able to reduce maintenance and repair costs by 59 percent, reduce unscheduled mold repairs by 48 percent and reduce unscheduled mold stops by more than 50 percent. Maintenance and repair costs for proprietary molds went down 64 percent over those same three years, and cavitation increased from 88 percent to nearly 95 percent. Machine downtime no longer is driven by tooling issues, and the company has saved over $200,000 in three years.

“The key was in getting the team to embrace change,” Gedwed acknowledged. “They really took it on as part of their responsibilities to improve the costs associated with the tool room.” In the end, a system for documentation and a long-term approach to preventative maintenance, rather than a reactive action when performance issues were revealed during production, made a significant difference in company culture, quality metrics and overall profitability.

“Good data puts the power back into management’s hands,” he continued. “We were able to reduce the annual cost on repairs and maintenance, identify costly and problematic molds and improve the efficiency of the work flow because we could see exactly where the issues were occurring. Our tool room no longer is a liability, but rather an asset.” 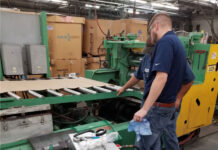 Spring Cleaning in the Tool Room: Five Jobs to Do Now