The heart and soul of a plastics manufacturing facility is in molding machinery. Together with the auxiliary equipment, these machines make electrical shock particularly problematic for the plastics industry. Unfortunately, electrical shock incidents aren’t uncommon for plastics. More than 90% of electrical fatalities among US workers are due to electrical shock. This does not account for the high proportion of injuries and fatalities that often are misclassified under a different cause of death. And yet, shock is downplayed within industrial settings. Most electrical safety training programs do not cover shock. Even with training, workers during production usually do not exercise precaution against it.

Oftentimes, companies’ safety methods primarily focus on providing workers with PPE; however, PPE is considered the last line of defense on the hierarchy of controls, with safety training (which is an “administrative control”) falling next in line. A last line of defense is a last resort, and when companies devote their resources to using last-resort protection methods, the disproportionate rate of worker fatalities that occur from electrical shock each year comes as no surprise. 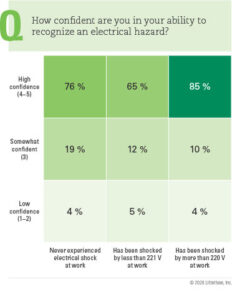 Nearly 40% of the respondents said they have been shocked by more than 220 volts while on the job, which was about half (51%) of the 78% who reported having been electrically shocked by any voltage.

Most (86%) of the respondents who reported having experienced more than a 220-V shock also rated themselves as either “very confident” or “extremely confident” when they were asked to rate their ability to recognize an electrical hazard. This was significantly more than those who have never been shocked when on the job and slightly higher than those who reported having experienced shock from less than 220 volts (82%). Overconfidence also was frequently cited among respondents as the main reason why people at their facility work on live equipment.

More than two-thirds of the respondents said that workers in their facility perform work on energized equipment. This is not only incredibly dangerous but is illegal per OSHA’s 29 CFR 1910.333(a)(1), which requires live parts that operate at 50 volts or more to be deenergized before employees work on or near them.

Respondents were asked using an open-answer field to cite the main reason people at their facility work on energized equipment. Troubleshooting was the most common justification, and the second most common rationale was for production purposes (such as to avoid the economic loss of stopping the equipment), followed by overconfidence, and reasons like laziness and convenience.

When analyzing the results, it became clear that not every facility’s safety training is working. For example, every respondent who cited PPE (or a form of it, such as gloves) as the main reason for why operators at their facility work on equipment while it’s energized also said they are provided electrical safety training by their workplace. If a worker believes they do not need to de-energize equipment if they wear PPE, then their safety training has failed.

The survey found no connection between an accurate knowledge of how much voltage is safe to work on or near (50 volts) and those whose companies provide them with safety training. In other words, the rate of safety-trained workers who considered more than 50 volts to be hazardous to work on or near was the same as the rate of safety-trained workers who believed up to 500 volts to be a safe working voltage. If a worker cannot identify a safe working voltage from a hazardous condition, then their safety training failed. Any pertinent safety practices the worker was able to retain are useless if they can’t identify a hazard to begin with.

Most industrial sites require employees to wear PPE. However, standard-issue PPE does not protect from electrical shock, and electrical workers can be lax in properly wearing electrical PPE. Workers often complain electrical gloves make it difficult to get the job done because they are cumbersome or bulky. As a result, operators may remove their electrical gloves to perform the work.

While electrical gloves are important, PPE is the last line of defense. Electrical gloves must maintain their dielectric properties, physical strength, flexibility and durability for them to remain effective. Whether the worker ultimately wears them is a different story.

Rubber mats do not remove the potential for injury and fatality incidents to occur. Workers do not always use the mats due to the hassle of extra work they create when breakers or contactors are racked in or out. Rubber mats also are rendered ineffective when wet, which also causes workers to not use the mats.

Electrical injuries and fatalities are among the most preventable types of occupational injury and fatality, and yet they continue to happen. Companies usually emphasize safety in hypothetical situations, but not when the situation occurs in real time. However, even in the most safety-active companies, the principles taught in safety training that resonate with workers can be abandoned during business operations.

Ground-fault circuit interrupters (GFCIs) are designed to protect people from electrical shock. GFCIs monitor the current between a circuit’s grounded and ungrounded conductors. Any imbalance (with the exception of small amounts of leakage) indicates that the current is returning through an unintended path (such as through the ground or a person). If the GFCI detects an imbalance, it will rapidly shut off the power.

Class A GFCIs – such as those used in residential applications – shut the power off when the difference between the leaving and returning currents is 6 mA or more. This trip level, however, is unrealistic for manufacturing applications. Therefore, plastic manufacturers require special-purpose GFCIs (SPGFCIs), which have a 20-mA trip level at a minimum of one second. This provides them with greater flexibility, while still providing complete protection from electrical shock.

Systems that have higher maintenance requirements are less forgiving of human error and more prone to failure. As a reminder, it is the current, not the voltage that kills. This is why Class C, D and E GFCIs are so important: they monitor the ground-return path continuity and then interrupt power if any integrity is lost. This, in turn, eliminates the possibility of any personnel being shocked or electrocuted.

Even the best safety training and PPE for workers still will leave employees vulnerable to electrical shock injury and fatality incidents. The survey results suggest that safety training isn’t working. If it were, workers would have a more accurate understanding of what makes an electrically hazardous situation.

Only in the aftermath of tragedies is it easy to understand just how important investing in prevention is. Human-based safety methods require them to be executed with consistent precision: without error, by every person, every time. Designing safety into the process provides a reliable backup when safety training goes by the wayside.

View a full report of the survey’s findings: Littelfuse.com/shock-survey. 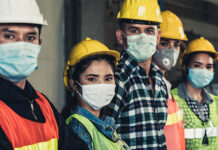 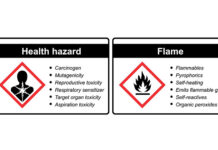