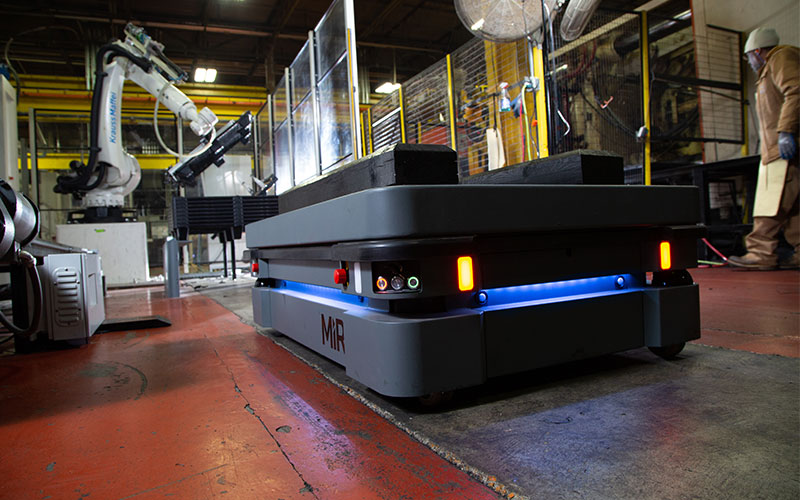 Automation is hailed as the answer for those looking to add operational efficiencies to their manufacturing floor, but adding robots has implications for safety, too. While line-side robotics have received significant attention for the ability to automate repetitive tasks in production, safety benefits in the warehouse and material handling areas are garnering additional interest.

Mobile robots move among equipment and employees on a plant floor without direct oversight, using sensors to avoid obstacles. “Autonomous mobile robots make processes and workflows more efficient and productive,” optimization consultant Ed Romaine wrote recently. “This is typically achieved by performing non-value-added tasks – such as transporting, picking up and dropping off product – in order to free up laborers to perform other tasks that add value to the product/operation – like picking, checking or packing an order.”1

“Most of it revolves around all sorts of material transportation,” explained Matt Charles, sales director for the Midwest US and Canada regions for Mobile Industrial Robots (MiR). “There are really good applications in that space, such as at the end of a line where full pallets are coming off a conveyor. The pallets need to get from the end of the line to a stretch wrapper or to shipping and receiving. Robots are an intelligent way to do that.”

Autonomous mobile robots (AMRs) connect the manufacturing space to shipping and receiving or warehouse spaces without the need for fork trucks. “It allows the fork trucks to do their jobs behind the scenes, away from people on the plant floor,” said Charles.

Mobile robots also can be utilized in the quality system, transporting goods to the inspection equipment for those involved in quality checks. And, these robots aren’t only for end-of-line; they also can be used in feeding the lines, such as in cart transport with resins or by bringing empty pallets to employees at their stations.

“The implementation of mobile robots can keep employees at their stations, eliminating movement,” said Charles. “People are good at making decisions, and our robots are allowing them to continue doing that while automating the mundane tasks.”

Eric Truebenbach, director of corporate development at Teradyne, was quoted in a recent article in which he discussed the safety advantages of mobile robot implementation: “Warehouse environments, for example, require significant amounts of heavy lifting, over-reaching and repetitive motion – work for which the human body and mind are not designed. Ergonomic injuries, accidents and quality lapses caused by that conflict are well documented. For example, in 2018, the National Safety Council reported that forklifts were involved in nearly 8,000 non-fatal workplace injuries and 85 work-related deaths.”2

Charles agreed. “Fork trucks, by nature, increase the possibility of accidents in a production space,” he said. “By adding mobile robots, we can isolate the manufacturing space where there are many employees, keeping the fork trucks to the warehousing areas. Eliminating that safety risk is a big part of what people are starting to apply robotics to.”

With the ability to handle heavy loads, autonomous robots can move materials and inventory efficiently – without running into equipment or employees. The Truebenbach article explained, “…Artificial intelligence-driven navigation systems enable AMRs to determine optimal delivery paths in real-time, making it possible for these machines to respond instantly to changes or obstacles in the environment.”2

The autonomous robots are programmed to follow a path, a simple task that essentially creates a map that determines the most efficient route for the task the robot needs to accomplish. “For instance, our robots broadcast their own WiFi network, so you can use a phone or tablet to connect,” said Charles. “It’s a web-based interface, and a virtual joystick comes up to help users teach the robot to remember certain areas.”

One safety benefit that may not have been a consideration prior to March 2020 is the ability of mobile robotics to aid in social distancing. “Reducing direct human contact through social distancing measures has become extremely important since the COVID-19 crisis, and manufacturers are trying to adapt to the guidelines that are deemed mandatory in order to keep their operations running. Typically, manual material movement jobs like humans pushing products to the next station, building and inspecting parts and forklifts picking up and dropping off goods all require close contact of workers. However, autonomous mobile robots (AMRs) eliminate unnecessary contact in and between work cells and therefore, can reduce the risk of shut down due to COVID-19 by keeping workers safe.”3

What are the ’Danger Zones’ when working with autonomous robots?

“Studies indicate that many robot accidents occur during non-routine operating conditions, such as programming, maintenance, testing, set-up or adjustment. During many of these operations the worker may temporarily be within the robot’s working envelope where unintended operations could result in injuries.”4

At this time, there are no OSHA standards for the robotics industry. However, said Charles, that will change as robots become increasingly integrated in manufacturing environments. “There are current guidelines out there for autonomous guided vehicles that are following strips on the ground,” he explained, “and new standards will be coming out in the next few months regarding mobile robotics.”

That doesn’t mean, however, that safety awareness isn’t important. “Anytime you’re integrating a collaborative robot, you want to do a risk assessment first,” Charles said. “We provide some guidelines to help people see potential risk factors, such as pinch points. This allows safety signage to be placed near the points that have been identified. Robots also have the ability to make noise to provide audio warnings, but there are some operation areas that will need initial precaution from employees – whether docking to a conveyor, a station or a cart.”

There also are applications that aren’t ideal for robots. For mobile robotics specifically, there are inherent challenges in tight spaces. “Our robots like to have six- to eight-foot aisles to allow them to navigate efficiently,” said Charles. “The safety scanners have a bubble around them to keep the robots from running into anything, so it’s not ideal if the aisles are too narrow.”

For those considering implementation of mobile robot automation, Charles said the best way to move forward is to dive in. “It’s fairly simple to do a proof of concept to see how it works in a facility,” he said. “There are a whole lot of potential ‘gotchas’ with aisle width, floor space and the grade of the flooring, so demo robots allow us to educate people and give them an initial comfort level. We can set it up in a matter of minutes and tell quickly if it’s a good project or one that isn’t ideal.”

Charles explained that set-up can take only 30 minutes for what he termed basic missions. “When you start adding more robots and need to consider charging times or connecting the robot system to other systems (such as machines with the ability to communicate with the robots, signaling when it’s time for material pickup), that’s where the complexity comes in.”

With a range of potential tasks, mobile robots often receive consideration based on production efficiencies alone. However, increased employee safety also should be in the “positive” column when weighing the benefits of production floor automation. 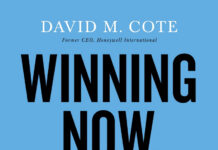 Booklist: Stick to the Vision

To Repair or Not to Repair?