Students receive thorough instruction on all the manufacturing components: one-third materials, one-third processing and one-third design. “It’s very hands-on, and every class has a lab,” said Jonathan Meckley, program chair and associate professor of engineering. “The students understand the correct way to approach manufacturing when they graduate.”

“Our kids are hands-on,” said Larry Miller, department chair. “Students participate in internships all over the state. We also contract work to do testing for companies that don’t have the appropriate facilities and participate in research and development work.”

“Our strength is probably in processing,” said Bob Susnik, professor in plastics engineering technology. “We do injection, extrusion and blow molding, and we emphasize hands-on with a lot of one-on-one instruction. In our general plastics class, we cover hot air welding, adhesive bonding, vacuum bagging and surface preparation.”

“From a curricular perspective, our diverse faculty provide coverage of all four areas: polymer chemistry, product design, polymer processing and characterization,” said David Kazmer, department chair. “We close the feedback loop from conception to realization. In addition, we have eight lab courses in the undergraduate program that address pad printing, assembly, welding and other secondary processes. We also have full master’s level elective courses related to coatings, adhesives and coloration.”

The replacement of an aging workforce is an area of concern throughout manufacturing, and plastics is no exception. A handful of universities across the US have plastics-specific programs churning out highly sought graduates, but while processors are anxiously awaiting another matriculating class, the universities are struggling with challenges that have little to do with industry demand.

Policy differences often arise when debating the costs and benefits of public funding for higher education. While Congress wrangles over proposed federal budget cuts to higher ed, administrators and faculty – along with students and their parents – deal with the realities of decreased per-pupil state funding, which has reduced the percentages of state support at public colleges and universities.

Eventually, changes in educational funding filter out to the businesses that want to hire those new grads. Educational programs on the lower end of anticipated employment growth become targets for cuts as university administrators look for ways to fill funding gaps. While steady growth is projected for the plastics industry, the US Bureau of Labor Statistics projects a growth rate of one percent in materials engineering occupations, compared with a general occupation growth rate of seven percent, by 2024. The resulting scarcity of plastics engineering graduates already is apparent, challenging employers seeking the next generation of talent.

During the 25 years leading up to 2012, state budgets typically provided 65 percent more funding to public higher educational institutions than the federal government, according to a 2015 study by the Pew Charitable Trusts. After the Great Recession hit, per-student state budget contributions to higher ed began to shrink significantly.

Figures compiled by the College Board show that federal aid grew from nearly $190 billion in 2008, spiked up to $258.8 billion in 2010 and then settled around $240.9 billion by the 2015-16 school year. Pell Grants, a federal financial aid program based on need, are responsible for much of the federal spending growth, particularly as recession-hit businesses closed and newly unemployed workers searched for careers. With fewer job opportunities, some of those workers went back to school. College enrollment grew, tuition began a rapid rise, per-pupil state funding dropped and the budget percentages represented by federal funding increased – driven by the resulting demand for Pell Grants. Nearly a decade later, those effects of the recession are still being felt.

“Shawnee State is a small university in a rural area,” said Larry Miller, plastics engineering department chair at the university in Portsmouth, Ohio. “Most of our students are on financial assistance and are first-generation college students.”

Among the states represented in this article, Ohios per-student state funding cuts were the least harsh – a 15 percent drop between 2008 and 2015 – with an average $523 rise in tuition.* In addition, the Shawnee State program is benefitting from a $1.2 million capital improvement program to update facilities and systems. Even so, Miller says, tighter budgets increase pressure to reduce the number of instructional hours. “It’s difficult to offer classes in the secondary processes,” he said, “but we do a little bit of those in our other classes.”

A significant drop in state funding occurred in Pennsylvania, where the per-student rate of state support dropped 33 percent between 2008 and 2015. During that period, tuition at state-supported colleges and universities increased an average of $2,202. At Penn State Behrend in Erie, two faculty positions have been vacant, putting a hold on student recruitment, according to Jonathan Meckley, program chair and associate professor of engineering. The vacancies have affected the plastics engineering curriculum, Meckley said, such as a technical elective focusing on secondary processes that had to be dropped. “They are mentioned in the courses,” he said, “but there’s not a lot of depth.” Despite the vacancies, Meckley said faculty members regularly present various continuing education classes, pulling from the local area and as far as the West Coast.

Although tuition rose an average of $2,200 by 2015, the state budget cut was less severe in Massachusetts, where per-student state support fell by 16 percent over the period. Generous endowments have helped shield the plastics engineering program at the University of Massachusetts Lowell. “Our graduates do well and give back to the program,” said David Kazmer, program director and department chair. “While plastics engineering is the smallest program within our college, we have more endowments than all the other majors combined.”

Kazmer said UMass Lowell also has felt the staffing shortage, acknowledging that the department is hoping to fill a position for an adjunct instructor to teach an automation course.

Among the states included in this article, average tuition rose the most over the 2008 to 2015 period in Washington: a $3,446 increase after a 20 percent drop in state per-pupil funding.

Despite the financial stress, most of the programs represented were stable or growing in terms of enrollment. Stable enrollment was reported at Penn State Behrend, Western Washington University in Bellingham and the University of Wisconsin-Stout.

“Our program is growing,” said Miller of enrollment at Shawnee State, where the program hosts about 60 majors. “The plastics industry is the largest in Ohio, and we offer the only four-year plastics degree.”

At Ferris State University in Big Rapids, Michigan, enrollment in the plastics engineering technology program has nearly doubled in the past five years, according to Robert Speirs, professor and plastics engineering technology program coordinator. However, while the student population has grown from 118 to 217 students over the past five years, the program has limited incoming freshman to 50 students due to funding restrictions.

From its beginning in 1971, the engineering technology program at Pittsburg (Kansas) State University has grown, shrunk just before the turn of the century, then grew again to stabilize at around 70 students during the past seven years or so, said Bob Susnik, professor in plastics engineering technology. Susnik said the programs recruiting strength is in word of mouth – and a strong employment outlook: “Alumni go out in industry and are successful, and the word passes on. Right now, the job market is crazy. We can’t supply enough graduates.”

Prospective employers have been actively recruiting this spring’s plastics engineering graduates, and program directors at many of the schools say placement is virtually 100 percent.

Students at Ferris State University serve two paid internships for at least 10 weeks each. During that time, they make long-lasting connections while gaining real-world experience that makes them highly sought as graduates.

At Pittsburg State, Susnik said graduates go to such familiar in-state companies as Boeing or Cessna, but they also might turn up as far away as China.

Adam Kramschuster, associate professor and director of the plastics engineering program at the University of Wisconsin-Stout, said, “Our plastics engineering program is a hybrid. It has more hands-on experiences than a typical, fundamental (mechanical) engineering program – but not as much as a technology program.” He said most graduates in UW-Stout’s 80-student program are recruited into medical device manufacturing, which is prevalent in the region, but opportunities abound. “We have had students obtain careers at consulting firms and large tech/medical OEMs as well, and multiple extrusion companies,” he continued. “At the same time, a wide variety of companies that deal in plastic part design, plastic materials or plastic processing, have expressed interest in hiring our students or have already done so.”

Because there are no graduate students in the program, undergrad opportunities to participate in research are plentiful at Western Washington University in Bellingham. “Students participate in projects involving product design, material design, process optimization, forensics, testing and analysis,” said Nicole Hoekstra, professor of plastics and composites engineering. “There are more research opportunities while at school and permanent job positions after graduation than we can currently fill.”

Businesses hoping to make connections that might offer an opportunity to snag the best new grads of the future, possible financial advantages and a voice in future program direction might consider strategies that educators say have worked in their institutions. Among the possibilities: Offer internships. Volunteer for a program mentorship or advisory board. Donate needed equipment, installation or training. Think about contracting with the program for research, or consider an endowment.

At Ferris State, alumnus and supporter John Kaverman of Pad Print Pros said long-standing corporate relationships and student activity in the Society of Plastics Engineers have resulted in several in-kind donations or consignments of equipment, installation and training. The program’s partnership with Wittmann Battenfeld is one example: Two Wittmann robots and control software upgrades are consigned to the university in return for Wittmann’s access to conduct regional training sessions at the facility. In addition, in 2015, SPE’s Decorating and Assembly Division donated a new pad printer to Ferris State, with the machine purchased at cost from Innovative Marking Systems.

Shawnee State is one program taking advantage of the knowledge and resources available through local industry. “We have an advisory board of about 15 to help us,” Miller explained. “Our grads are in management positions all over the state and across the country at plastics manufacturers and other businesses – Honda, Stanley Electric, GE, Procter & Gamble. We have a good alumni network.”

Kazmer at UMass Lowell emphasized the value of industry/education partnerships, saying that institutional facilities are built around a shared resource model. “Support from industry is amazing. Students, researchers and industry seminar attendees use the state-of-the-art at industry scale. We appreciate all the consignment and donations.” 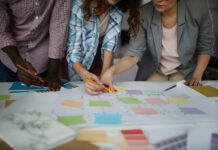