As my cab pulled up to the Las Vegas airport, I received a text telling me the flight had been delayed. I made it through security, grabbed a latte and settled in to do important things like update Facebook, play Candy Crush and watch a few episodes of “The West Wing.” I had just spent three days at ANTEC in Las Vegas, and I needed a little downtime.

Ninety minutes later, my smartphone was demanding a battery charge and, like any seasoned traveler, I performed a covert scan of the area for a plug-in. The nearest location was surrounded by students wearing Pitt State Gorilla attire.

Pittsburg State University is located in Pittsburg, KS, about 160 miles south of the office of Plastics Business and Plastics Decorating magazines. Its College of Technology is home to a Plastics Engineering Technology department offering a bachelor’s program and, beginning in the fall of 2014, a degree program in Polymer Chemistry. I assumed (correctly) that the students also had attended ANTEC, so I introduced myself… and plugged in my iPhone. Nearly two hours later, with a radar malfunction causing delays at several airports, it became apparent we weren’t getting on a plane anytime soon, so I pulled out my laptop and we went on the record, talking about their conference experience, college studies and job prospects.

The Pitt State students were accompanied by Associate Professor Paul Herring. In total, nine students in the plastics engineering program, ranging from freshmen to seniors made the trip. Assistant Professor Rebeca Book also attended. “SPE has an effort through its Next Generation committee to host activities for young professionals and college students, so we made a big effort to get kids out here,” Herring said.

Dr. Jaime A. Gomez, PhD, is global business development manager for Coperion K-Tron Pittman, Inc. He also serves as vice president/communications for SPE’s executive board. “We know we have to rejuvenate and invigorate the association to appeal to the younger generation,” he explained. “A technical conference like ANTEC can be intimidating for a group of 20-year-olds when the speakers are all 50-year-old men who’ve written books and developed equations.” In order to attract a younger audience that wants to be more active and apply their knowledge, ANTEC contained programming directed at the students and young professionals in attendance. This included a “plastics race” that sent the students down the Las Vegas Strip, following clues that led to the answers to a set of questions.

“We are losing 95 percent of the student membership in SPE once they leave college and enter their careers,” Gomez said. “We have to address the value by doing a better job of explaining to the young people what the benefit is for their careers. The plastics race was part of that. We mixed the teams up to encourage networking and then sent them off to enjoy themselves.”

According to Pittsburg State senior Tom Roudebush, the mission was accomplished. “I really thought it was a great project. It was an opportunity to ‘nerd out’ on plastics stuff and see the town, too,” he explained. “That shared experience brought people together during the rest of the conference as well. It can be tough to connect with new people, but when you have an activity that everyone is engaged in, it’s easier to open up, and I definitely built some relationships that I hope will help me in my career.”

To facilitate more networking and exposure for the Pitt State program, the students and faculty staffed a booth on the exhibit floor, hoping to gain a broader exposure for the program. “We wanted to talk about our Bachelor’s program and also spread the word about a new polymer chemistry degree that is being offered at Pitt State, starting this next fall,” Herring said. “We also have a polymer research center that is doing a lot of things with bio-based plastics right now. It’s important to make sure the industry knows that we’re taking an active role in its growth.”

According to the college’s website, the Plastics Engineering Technology major has two emphases – manufacturing and design – which involve comprehensive coursework, including practical and theoretical lectures with a strong emphasis on applied laboratory efforts in the areas of processing, resins, testing and design. Degree requirements include coursework in engineering graphics and computer-aided design, plastics testing technology, thermoset and thermoplastic resins, mold design, plastics processing and plastics part design.

Currently, the college has 60 students majoring in the plastics engineering program. That number is down from enrollment figures 10 years ago, but Herring reported a strong enrollment for the 2013-2014 freshmen class and expects another increase for the upcoming year. “Everyone graduates with a job, and that’s a big selling point for the program,” he explained. “When we hold a job fair, the kids are walking out with five job offers. We’ve got to get our enrollment numbers up, and we have some new recruiting strategies, new ideas to implement next year.”

The students’ perspective on the plastics industry

“The Plastics Technology program at Pitt State hasn’t had anyone present at ANTEC for a few years, so we wanted to get the kids out here to see what it was all about. Next year, we hope to have several with posters and papers,” explained Herring.

Austin Bailey, a junior from Fort Scott, KS, is one of those students with a desire to present next year in Orlando, FL, when SPE’s ANTEC co-locates with NPE. “I am involved in research at the university, so I wanted to take a look at the posters, as well as see who was doing research along the same lines I am. I’m working with some flame retardancy additives and comparing the properties of those, and I’m hoping to present both a paper and a poster next year.”

Fort Scott is located 30 miles north of Pittsburg State University, and the local high school requires students to take a technology course. That exposure played a role in Bailey’s career choice, as did the fact he has relatives in the plastics industry. “At our high school, we have a mini injection molding machine, so I was familiar with the technology. Also, I’ve had family members go through the Pitt State plastics engineering program, and they’re making good money now,” he explained. Bailey is working on degrees in both plastics technology and the new offering in polymer chemistry. “I’d like to go work at a company where I can work both on R&D with materials and also on the production floor. The main idea behind those two majors is not only to produce the resin, but produce a resin that will run on the machines,” he said.

Through Pittsburg State job fairs, Bailey has a summer internship lined up with BD Medical, one of the largest medical device manufacturers in the world, at its Holdrege, NE, facility. “Even at the internship level, I had to turn down five or six offers,” he said.

Daniel Youngers is a senior and will be graduating before this article is published. He has accepted a job with The Coleman Company, a subsidiary of Jarden Company, where, the website declares, “Our most important assets go home every night.” Youngers also interned with BD Medical, and it was his experience there that narrowed his interests. “BD Medical was a great internship because while the facility is primarily focused on injection molding, it also walked me through all the steps in mold design and part design.”

Originally from Viola, KS, Youngers arrived at Pitt State intending to complete a degree in metal manufacturing. “I took a tour through the campus with a guy who had the keys to everything. When I saw the plastics lab, it seemed like that was where the possibilities were in manufacturing,” he said. “We’ve been manufacturing products with metals forever, but we’ve only been into plastics since World War II. There are a lot of discoveries yet to be made. I want to figure out how to make things better, and that’s why I’m excited about the job opportunities with Coleman, because the company wants their engineers to think that way.”

When asked how to draw more students into the Pitt State plastics technology program, Youngers said, “We need to publicize that we have 100-percent job placement. There are a lot more companies that would have hired us, but there aren’t enough students. The career services department receives phone calls all the time from companies that want a person with two to three years of experience. It’s pretty exciting that there’s that much opportunity.”

Unlike Bailey and Youngers, manufacturing wasn’t a career path Roudebush had considered, despite the family business. “My dad actually owns a small business in Stillwater, KS, that makes composite fire retardant parts for the aerospace industry,” he said. “Manufacturing is familiar area for me, but I had never seen myself going into it. I was undecided on a major when I started at Pitt State – I chose Pittsburg because it was where both of my parents had graduated.”

Roudebush remained undecided until his sophomore year. “I knew an older student in the plastics program,” he explained. “He took me to the facility, showed me the plastics lab and introduced me to the teachers.” An entry level course showed Roudebush that plastics would be a good fit. “For me, it was a good mix of hands-on and problem-solving, and obviously the great job placement was attractive. I felt really comfortable with the faculty, and the class sizes are small so they have time to work with you.”

Those small classes, however, are something Roudebush would like to see change. “I was the president of SPE’s student chapter at Pitt State this past year, and one of my biggest goals was to get more membership involvement and in turn, get more people interested in the major,” he said. “People don’t realize the number of job opportunities we have when compared to a generic business degree. A lot of students are thrown off by the chemistry, but I’ve sat through some business classes that I thought were just as challenging as my chemistry classes.”

While Bailey’s rural-area high school had classes in manufacturing technologies, that wasn’t the case for Roudebush’s Kansas City-area high school. While Pitt State’s plastics technology freshman class is larger this year, Roudebush feels strongly that exposure would drive more students into the program. “There are students in the plastics program now who got hooked on manufacturing in high school,” he said, “but we didn’t have anything like that in my area. If we could get into the larger high schools to talk about the opportunities, we could grow even more.”

Roudebush also is graduating in 2014 and has accepted a job with Paragon Films, a stretch film manufacturer in Tulsa, OK. “This isn’t a career I had looked at for myself, but I think the problem-solving and the potential are cool. I’m lucky to be in this industry,” he said.

Before we (finally) boarded the plane, I made sure the students had my business card. They are, after all, the future of the plastics industry. When they begin to do great things in their careers, I want to hear about it. 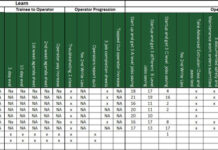