Natural or man-made, five hours of downtime or five weeks, disaster can strike at any time. Employee safety, reestablishment of production, and customer communications all should be addressed.

Do you have a plan in place?

York Imperial Plastics, in York, Pa., didnt wait for an emergency to trigger the creation of its disaster recovery plan. Instead, its state-certified safety committee identified the development of the plan as an improvement opportunity.

Creation of York Imperials disaster recovery plan began in the summer of 2008. Approximately 80 hours went into its development and the approval process, and then there were a lot of hours after that preparing all of the things we had identified that werent in place, explained Chris Leh, director of operations for York Imperial.

Leh had previous experience in disaster recovery plan development, taking the lead in creating the 8-page Emergency Action Plan and 12-page Preparedness, Prevention, and Contingency Plan (PPC) that assess physical threats to continued operation and lay out procedures for dealing with business interruptions. We included everything from bomb scares to fires, to communicating with the press, to who is authorized to let people back in the plant, said Leh. We looked at what types of hazards there would be for the environment if we would have a chemical disaster or oil spill, and what information the first responders would need to deal with those hazards effectively. The plan also places an emphasis on employee and visitor safety, directing all employees to be trained in safe evacuation procedures.

As a result of the plans development, York Imperial has instituted annual first aid and CPR training for its employees, and also installed a dedicated first aid and safety station complete with medical supplies. Exit Signs and Evacuation maps were installed throughout the facility, and monthly inspections are conducted for the buildings fire extinguishers, emergency lights, and Material Safety Data Sheets (MSDS).

There were a lot of action items that were generated that have really enhanced the safety of our plant from a very proactive stance, said Leh. If something would happen, I think we would be able to react very well, but there are a lot of benefits we got out of the disaster preparedness process without having to have a major disaster. As an example, Leh cites the ease and accuracy of York Imperials MSDS system now, which he says is literally 100 times faster and better than it was before. All MSDS are now electronic, with copies kept onsite on the server and backup copies taken offsite each evening, so emergency personnel can access the sheets offsite and outside the building in the case of an emergency. As Leh pointed out, paper versions of MSDS sheets arent practical in the event of fire or explosion. We invested upwards of four months of a full-time employee preparing nothing but the electronic MSDS system, but now if theres any question on any materials were using in the plant, we can go to a computer and find the answers were looking for.

The disaster recovery plan calls for an annual review, to ensure that the latest threats are assessed and included. Leh is currently adding a pandemic procedure as a result of the H1N1 flu scare.

During the summer of 2009, Grand Rapids, Mich.-based Custom Profile lost all power during its third shift. Without a formal plan in place or management on site, the employees were unsure of the proper procedure to follow. The third shifters hung out for a period of time, but the power didnt come on, said Jenny Redes, HR Manager. Then the first shifters got here and a supervisor started sending people home. We had no idea who was supposed to do what or who was supposed to be here and we still had customers coming.

For Custom Profile, the lack of a communication plan caused more difficulties than the lack of power. Custom Profiles contact lists, including phone numbers for employees and customers, were all in its computer database. Even if the phone numbers had been accessible, no phone lines were working because the phones were connected to the server. When the power came back on in mid-morning, many employees had been sent home and no one was available to run the machines. We needed to have some sort of structure, said Redes.

The situation at Custom Profile was resolved quickly with the addition of a generator and plant operations were resumed, but the need for a contingency plan had been made apparent. As a result of the power outage, Custom Profiles emergency response team has drawn up basic procedures to act as an interim policy while a full disaster recovery plan is developed. The company is using an online tool offered to MAPP Members through Federated Insurance (see box on page 32). Company representatives can enter information on customers, suppliers, and employees, as well as insurance information, building spec information, and more. We had started our research and were beginning to draft a written policy, but then we looked into what Federated offered, explained Redes. The company expects to have a full plan in place by mid-summer.

Redes stressed that the events of last summer provided a valuable lesson not only for Custom Profile, but also for other processors. Not a lot of companies are focused on disaster recovery  especially seemingly minor disasters. We all know what to do in case of a fire or a tornado, but we didnt even think about a power outage.

First American Plastic Molding Enterprise is headquartered in South Beloit, Ill., but also has a facility in Ocean Springs, Miss. On August 29, 2005, Hurricane Katrina hit the region with a fury and disaster recovery took on a new meaning for First American Plastic President Bill Bartlett.

It was a stressful time, to say the least. Our first thought was obviously for our 70 employees in Mississippi. I was in the plant two days after the storm hit. The first night I got there, I slept in the parking lot in the car. I was able to find everyone and at least let them know that we would start back up as soon as we had power  it was important that our employees knew they still had a job.

We had customers calling, wondering when they could get their parts and their molds, but we really couldnt answer any questions until we got into the plant. Once we started sorting things out, it was obvious that there were numerous problems. One of the biggest issues was that our employees didnt have gas to get back and forth to the plant  the gas stations had all run out of fuel. I flew back to Chicago, rented a van and trailer, and loaded up supplies, food, and 250 gallons of gasoline. For a while, we were grilling meals for our employees in the parking lot.

Once the employees had been accounted for, the next priority was assessing the facility and equipment. Bartlett and the plants operations employees were able to enter the facility with flashlights to determine what harm had been done and whether any tooling was damaged. Once we sorted that out, said Bartlett, it was a matter of waiting until the power came back on.

Luckily, physical damage to the plant was minimal. We were down for seven days because the electricity was out, but we only had about $15,000 in structural damage, Bartlett explained. However, our human assets were decimated. A third of our people lost everything they owned and, when everything is wiped out, theres not really much to come back to. First American Plastic lost two-thirds of its employees, many of whom moved out of state to start over.

When it became apparent that the Mississippi plant would be unable to operate at full capacity, it was necessary to shift some of the work to the plant in Illinois, which was slow at the time. First American Plastic moved 65 percent of its business from Mississippi to Illinois over a 4-6 week period. Bartlett pointed out that open capacity at a second plant didnt solve all of the companys difficulties. Its not just a matter of moving tools. We had to figure out if we had enough machines to run the scheduled jobs, as well as employees in Illinois who were qualified and trained. There were a lot of things to think about.

Communication also was critical, with Bartletts cell phone in use as command central. We were in contact with our customers two to three times a day, trying to keep them as informed as possible, he said. The communication piece was tentative, but it worked. Our largest customer was not only extremely happy because we went through that disaster and didnt shut down, but they had another supplier go out of business and ended up transferring 50 tools to us.

Bartlett correctly stated that a contingency plan for an injection molding company is not a simple thing to develop. You dont go out and buy injection molding equipment and just have it sitting there, waiting for an emergency, he explained. But Hurricane Katrina provided a few lessons to the management staff at First American Plastic  lessons that can be applied to other companies in the process of developing a disaster recovery plan. We learned that there are better ways to back up our computer systems, said Bartlett. Fortunately for us, we didnt lose any data, but for a while our IT person was literally moving our server from one location to another to avoid rising water.

In addition, the company gained a new appreciation for the work its employees perform on a daily basis. Theres a lot of tribal knowledge with the people that we have. Were in the process of installing IQMS and were getting that tribal knowledge into a system, so that if an employee leaves, 50 percent of his knowledge doesnt leave as well. First American Plastic also gained experience in moving machinery and equipment, an experience Bartlett does not wish to repeat.

I have never in my life seen anything like the devastation of Katrina, said Bartlett, and I hope I never do again. I think there are certain things you can plan for and then there are other things you wont know until a catastrophe hits. But, our industry  as a whole  needs to get better at recovery planning, and this was a big wake-up call for us. 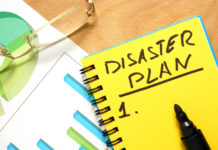