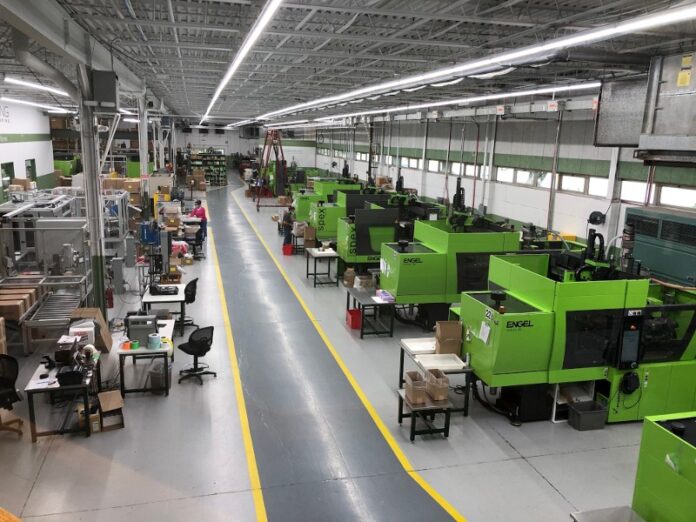 Sterling Manufacturing, Lancaster, Massachusetts, acquired Leominster-based Albright Technologies in 2019 for its silicone molding capabilities and manufacturing space. It has since invested over $2 million to convert Albright into a full LSR production facility with additional thermoplastic capabilities for its customers. The expansion is part of ten years of consecutive growth since new leadership took over in 2011.

In 2008, John Gravelle sold the Mar-Lee Companies, and after a three year non-compete, bought Sterling in 2011 with most of the leadership joining the new company. Over the next ten years, the company grew with key investments that included switching the machinery to all-new machinery from ENGEL – a maker of injection molding machines and robotics – adding and expanding cleanrooms, upgrading quality capabilities and bringing in both scalable and high production jobs. It paid off with a soaring 600 to 700% increase in sales.

But all of this growth soon led to the need for more space. In January 2019, Sterling purchased Albright Technologies of Leominster, Massachusetts. This acquisition added LSR capabilities to their list of offerings, particularly for the medical and aerospace segments – the bulk of Sterling’s business – and gave them an additional 40,000 sq. ft. of production space.

Stan Bowker, president of Sterling Manufacturing, stated that the company saw the opportunity to not only add silicone capabilities and a facility that would allow it to expand its growth at Sterling, but to also grow the silicone business itself by offering full-scale production.

Albright was already world-renowned for its prototype and R&D capabilities for the silicone market but focused mainly on short-run development projects and tooling for the LSR space. Bowker stated that the other appeal was Albright’s commitment to ENGEL, much like Sterling’s own. When the company bought Albright, ENGEL was there with silicone offerings that made the transition even smoother.

The Albright expansion saw the addition of three new ENGEL machines that included a 130 US ton e-victory hybrid machine for silicone production plus two victory hydraulic machines for thermoplastic runs – a 55 US ton and a 130 US ton. All three machines are the ENGEL tie-bar-less design which provides unobstructed access to the mold mounting area.

The more than $2 million expansion at Albright includes two cleanrooms, one each for thermoplastic and silicone applications, an updated compression silicone molding room and a new white room with automation for thermoplastic production. The company also plans to hire 10 to 15 more employees over the next two years.

Bowker explained that the company has had a strong relationship with ENGEL for over 25 years of its careers. ENGEL’s diverse offerings and innovative solutions – from small tonnage cleanroom machines to large tonnage and two-shot, as well as vertical and silicone machines – allow the company as a custom molder to provide its customers with a wide array of production capability choices.

The expansion has ultimately given Sterling a larger presence in the Northeast market. Four cleanrooms, a compression room, a tool shop, two automated white room areas plus the extra space of an additional facility with its LSR capabilities – all backed by ENGEL’s injection molding technology – gives the company the runway it needs to take off into further growth and success.

Sterling/Albright serves the medical, military/aerospace, pharmaceutical, industrial and consumer markets with a combined total of 35 injection/LSR molding machines ranging from 28 to 550 US tons. The company offers high-volume, fully automated manufacturing, including automated assembly and in-mold decorating as well as unique tooling and mold solutions. Specialty processes, in addition to LSR, include multi-material, micro and insert molding, as well as value-added decorating.