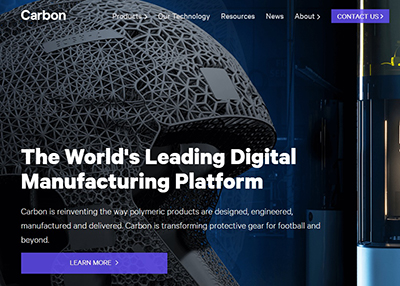 Carbon, Redwood City, California, a digital manufacturing platform, has announced updates to its leadership team at an important time for the company, which is poised for growth through partnerships with such companies as adidas, Ford, Johnson & Johnson, Riddell and BMW. The updates to leadership include promotions and new positions.

Craig Carlson has been promoted from vice president of engineering to chief technology officer. As CTO, Carlson will be responsible for the short and long term technology needs of the company as it scales. Carlson joined Carbon in 2014 from Tesla Motors, where he was vice president of software and electrical integration, and was responsible for the Roadster and Model S.

Philip DeSimone, a Carbon co-founder and its current vice president of business development, has been promoted to the company’s first chief customer officer. DeSimone has worked since the company’s inception to quarterback major partnerships with brands like adidas and Riddell, as well as lead its global sales organization. In this new role, he will be responsible for customer success, retention and acquisition, as well as managing Carbon’s most strategic relationships and customers.

Meg Nibbi, a current vice president at Carbon who has been instrumental to the company since 2015, has been promoted to VP, general counsel. Nibbi has represented private and publicly-held high growth technology companies and venture investors for the past 30 years in transactions that include financings, IPOs, mergers and acquisitions. She most recently served as outside general counsel to Mohr, Davidow Ventures, as well as a number of emerging growth technology companies in the hardware, software and IoT spaces.

Additionally, Rich Narasaki has joined Carbon as its vice president of brand marketing reporting to Dara Treseder, chief marketing officer. Narasaki comes to Carbon from GE (General Electric Co.) where he served as Head of Global Brand. He will be responsible for defining and growing Carbon’s brand as the company grows and scales across new industries and into new, global markets.