In some ways, we misunderstand the word “culture” when talking about businesses. Because we are so focused on creating positive momentum in manufacturing, discussions about culture are laser focused on improvements. Culture can be about the employee – driving profitability, throughput and a motivational atmosphere by putting employees first and seeking their input – which is perhaps how we’re used to hearing it these days, but it’s actually more broadly defined. Culture is whatever drives day-to-day operations – good or bad, positive or negative.

In this edition of the Booklist, I’m throwing out some new ideas about culture by featuring authors whose day-to-day businesses were driven by different priorities, and one author who helps break down leadership styles to help companies understand their own strategies. 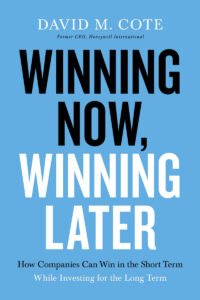 From local coffee shops to the largest Fortune 500 companies, everyone is struggling to make the impossible choice between chasing short-term objectives and creating a secure future for their company. David Cote understood this dilemma and rejected it.

Upon taking his place as CEO of Honeywell International in 2002, he encountered an organization on the verge of failure thanks to years of untrammeled short-termism. Ultimately, he turned around the rapidly sinking powerhouse plagued with years of in-the-moment decisions.

Winning Now, Winning Later reveals the bold operational reforms and counterintuitive leadership practices you can put into practice that will allow you to do two conflicting things at the same time – pursue strong short- and long-term results. The book will help:

Determine where and how to invest in growth for maximum impact

Sustain both short-term performance and long-term investments even in challenging times, such as during recessions and leadership transitions

Step back, think independently, and foster independent thinking among others around you 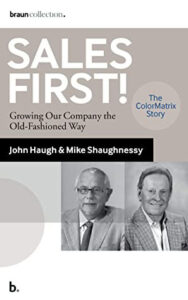 How do you grow a business to $100 million in revenue without venture capital? Sales First! These two entrepreneurs financed growth the old-fashioned way: by selling products.

In the 1980s, Midwestern chemical salesmen John Haugh and Michael Shaughnessy found a new way to add color to plastics. It had great potential, but they lacked the connections and experience needed to raise venture capital. How would they afford to grow their business? Driving their beat-up cars around the Ohio River Valley, they devised a simple plan: “Sales First!” With every decision about customers, capital or human resources, they asked one question: Will it generate sales quickly? That’s how they grew their company to over $100 million in revenues, then recapitalized it and eventually benefited from its sale for over $400 million. In the process, John and Mike managed their relationship so well that they never had a significant disagreement between them – and they created hundreds of jobs in Rust Belt Cleveland. 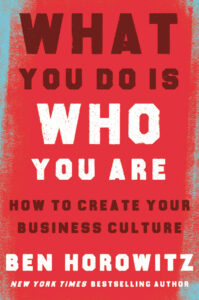 What You Do Is Who You Are: How to Create Your Business Culture
Author: Ben Horowitz
Released: October 29, 2019

To Ben Horowitz, culture is how a company makes decisions. It is the set of assumptions employees use to resolve everyday problems: Should I stay at the Red Roof Inn, or the Four Seasons? Should we discuss the color of this product for five minutes or 30 hours? If culture is not purposeful, it will be an accident or a mistake.

What You Do Is Who You Are explains how to make your culture purposeful by spotlighting four models of leadership and culture-building. Horowitz then offers guidance to help any company understand its own strategy. 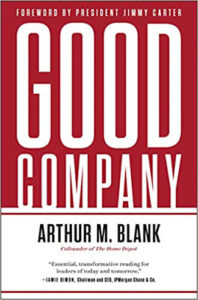 Arthur M. Blank believes that for good companies, purpose and profit can – and should – go hand in hand. And he should know. Together with cofounder Bernie Marcus, Blank built The Home Depot from an idea to a $50 billion-dollar company, the leading home improvement retailer in the world. And even while opening a new store every 42 hours, they never lost sight of their commitment to care for their people and communities.

Blank left The Home Depot with a burning question: Could the values and culture that made that company great be replicated? Good Company takes readers inside the story of how he did just that – turning around a struggling NFL team, rebooting a near-bankrupt retail chain, building a brand-new stadium, revitalizing a blighted neighborhood, launching a startup soccer club and more. “When good companies put the wellbeing of their customers, their associates, and their communities first, financial success will follow,” Blank writes. “The entrepreneurs and business leaders of today and tomorrow have an extraordinary opportunity: to prove that through upholding values we can create value – for the company, for the customer, and for the community.”