Fourth-quarter indicators are down, nearly across the board, for plastics processors. Company leaders are reporting slowing sales, lower quoting activity and shrinking profit margins to round out the end of 2019. This stands in stark contrast to the sentiments and data shared just one year ago, according to the recently published 2020 State of the Plastics Industry by the Manufacturers Association of Plastics Processors (MAPP). 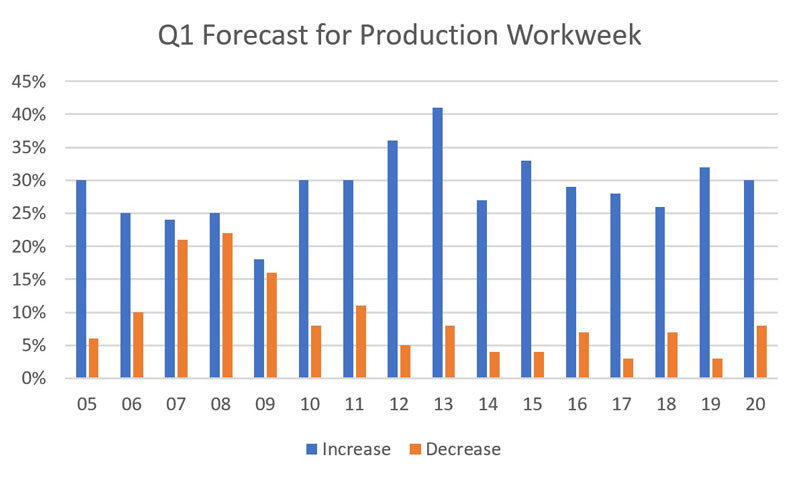 The State of the Plastics Industry has been a staple report in the plastics community for the last 20 years. Generated by inputs from nearly 200 plastics industry leaders, the report examines fourth-quarter trends, first-quarter and 12-month outlooks, as well as resin pricing, capital expenditures, challenges and operational changes. This data allows company leaders to benchmark how their organizations compare to the rest of the industry.

This year’s report reveals that only 37% of plastics companies experienced increased sales in the final quarter of the year, while 39% reported sales had decreased. These numbers reflect the lowest percentage of processors reporting fourth-quarter growth since 2005. Of the 37% that reported increases in fourth-quarter sales, 67% indicate that this is due to new programs or volume increases with current customers and 22% say this increase is largely in part to securing new customers.

As sales slow for plastics companies, so do employment levels. The average fourth-quarter workweek decreased for 30% of manufacturers (compared to 13% last year), and the number of production employees also fell for 32% of companies (compared to 13% in Q4 2018.). In tracking employment levels for the last 20 years, the last time this higher percentage of companies was reporting decreasing workweeks and production employee levels was in 2008.

However, companies are ramping up slightly as they head into the first quarter of 2020, with 30% of leaders indicating workweeks will increase and 62% reporting that they will remain the same. Similar trends in production employee levels also are predicted for the first part of the new year.

Of course, lowered production employee levels may in part be due to the ever-continuing challenge of finding qualified workers. In looking at the top 10 challenges facing plastics companies in 2020, workforce remains number one – with 100% of companies listing it as one of the top three challenges they need to address in the next 12 months. This continues a long trend of workforce development challenges plaguing plastics leaders – as it has been ranked in the top three challenges for the last nine years.

Not surprisingly, new business development was in the spotlight for improvement in the new year. Many processors are looking to not only grow sales, but also are focusing on diversifying their markets and customer base. On average, about 20% of a plastics company’s customers make up about 80% of the company’s total revenue. This leaves companies in precarious positions, especially those with a large focus in uncertain or volatile markets, should customers begin to pull back on orders or look for other suppliers.

For the first time in several years, worries about the economy (both at home and overseas) and tariffs on tooling appear high on the list of challenges reported by plastics leaders. Approximately 83% of companies serve customers in at least one other country, which means leaders are spending more time and energy focusing on the economic conditions not only in the US, but across the globe as well.

Adding to this, about 70% of plastics companies are pushing their tooling overseas – 90% of which is acquired from China. While plastics executives are stating that they haven’t felt the impact of tariffs yet, they are anticipating future negative impact. To combat this, they are working with their overseas vendors for price reductions or negotiating with their current customers to share the burden of tariffs. Sixteen percent of executives did indicate that they were looking to shift some mold purchasing back to the US.

Looking into the rest of the first quarter and the next 12 months, processors are anticipating a more optimistic, if cautiously optimistic, environment than what was seen at the end of 2019. Capital expenditure plans are expected to increase or remain the same as previous years as processors invest primarily in primary machines, automation and equipment upkeep. On average, companies are anticipating the investment of about $1.2 million in capital expenditures over the next 12 months.

Seventy-one percent of those surveyed are projecting an increase in sales throughout the year. Companies anticipating 2020 sales increases are budgeting for an average 10% jump over the next 12 months. With companies believing the biggest impact on their organizations will come from continuous improvement initiatives, strategic sales plans and a large focus on automation across the board (from production through assembly and warehouse), it seems that company leaders expect to combat the troubles of 2019 (lower margins, competition and lack of labor) and continue the 10-year high that has been experienced throughout the industry.