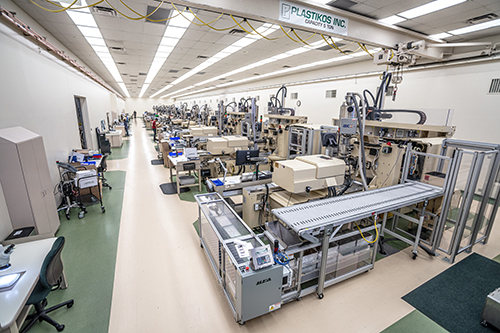 Plastikos, Inc. & Micro Mold Co., Inc., Erie, Pennsylvania, which specialize in precision mold design and fabrication, as well as tight-tolerance injection molding, report that Plastikos Medical officially opened its doors for business in September 2019 – down the street from Plastikos’ headquarters – to focus on manufacturing precision molded product for class II and class III medical devices. During the development phase of the project, the owners strategically separated the facility’s growth plans into two phases.

Phase I of Plastikos Medical consists of today’s current structure that was completed in 2019; a 25,000 sq.-ft.-facility with 12,000 sq. ft. dedicated to an ISO-7 cleanroom molding floor and accommodating 10 new Arburg medical injection molding machines. Five of those machines arrived on-site and were installed shortly after the buildings completed construction. The next five machines were added throughout 2020, and all 10 machines were fully operational as of October 2020.

The construction of Phase II of Plastikos Medical was slated to begin in March 2021, which will more than double the size of the current ISO-7 cleanroom. The added cleanroom space is being strategically utilized to fit an additional 15 medical injection molding machines as the need for additional cleanroom molding capacity arises in support of Plastikos/Plastikos Medical’s global medical device customer base. Ultimately, that will bring Plastikos Medical’s total fleet to 25 cleanroom medical machines. Originally, this phase was part of the company’s five-year strategic plan. Due to exceptional growth from the medical sector of its business, this strategic plan is being fast-tracked to match the need for additional cleanroom capacity.

Plastikos Medical’s expansion also includes substantially more than just doubling the ISO-7 cleanroom space from 12,000 sq. ft. to 24,000 sq. ft. Industry-leading automation will also be at the forefront of this expansion, along with the continued heavy utilization of Industry 4.0 principles & technologies. These upgrades will subsequently reduce risk and afford an even higher level of quality assurance and production efficiency for the company’s medical customers.

Robert Cooney, manufacturing manager of Plastikos, stated that the success of Phase I was enabled by 10 years of previous cleanroom experience with strategic medical customers, extensive R&D and testing on the latest machine, mold and support technologies to meet customers’ production demands and quality expectations. Looking ahead toward the Phase II plans, it is exciting to take these advances to another level in what the company has collectively learned since Phase I has been operational.

As Plastikos Medical moves forward with its plans for expansion, Plastikos is simultaneously undergoing a medical-driven internal renovation. Currently, Plastikos operates with 27 whiteroom machines plus another 10 ISO 7 cleanroom machines, totaling 37 molding machines. Renovation plans are underway to convert eight whiteroom machines into its own stand-alone ISO-8 cleanroom environment to further fulfil customer growth in the cleanroom medical space. Once completed, the space will fall under Plastikos’ current ISO 13485 certification and ISO 14698 compliance. This conversion is being done to offer additional support to Medical OEMs with growing portfolios that require a higher level of stringent production and quality requirements.

Philip Katen, president and general manager of Plastikos, said the Plastikos, Plastikos Medical and Micro Mold team is proud to play a key role in the growth and success of all of its customers, and the companies consider themselves as extended members of their client companies and their teams. These two major medical cleanroom construction projects reflect the proactive investment that the company make into its facilities, equipment and team to stay one to one-and-a-half steps ahead of its customers’ production needs. The company is excited for this next chapter in its history as it looks ahead in 2021 and beyond. 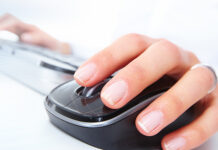