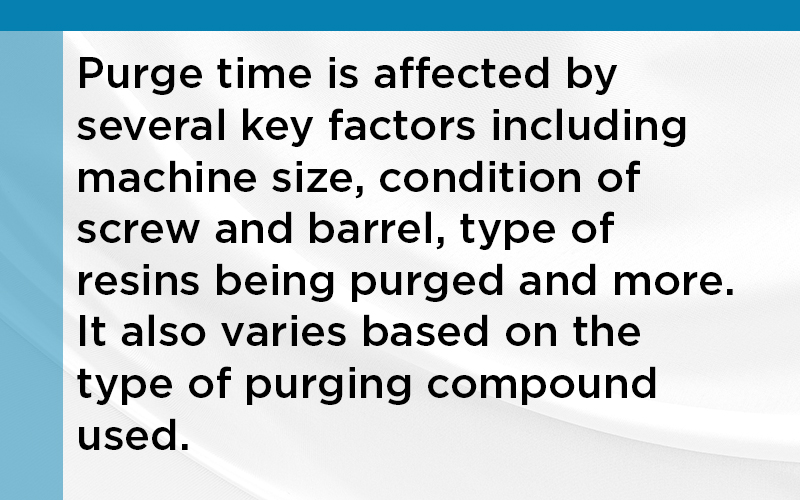 Have questions or doubts about the use of a commercial purging compound (CPC) prevented you from using one? Perhaps you already use a CPC, but wonder if it’s being used correctly or if it’s the best one for a specific application? You’re not alone. Below are commonly asked questions about purging compounds.

Question: Why should we use a purging compound?

Answer: “Old-school” methods such as flushing the machine with the next resin or regrind are time-consuming, material-wasting and just plain ineffective in removing color and carbon contamination. These materials are not designed to clean machines.When using regrind or virgin resins to purge, the material simply creates another layer over any resins, color deposits or carbonized material within the barrel. In time, these layers become additional sources of contamination, making purging even more difficult. A high-performance CPC is designed to not only facilitate color and material changeovers, but also to clean the machine.

Question: Why use a purging compound when we have all of this “free” regrind?

Answer: First, regrind isn’t completely “free” — there are costs associated with using regrind. Aside from the equipment and energy cost for grinding, the greater cost lies in the ineffectiveness of regrind to clean a machine. It is likely that a machine will have to be purged for a considerable amount of time with regrind, and then also purged several times subsequently during production. Clearly, this offers no savings over using an effective CPC.

Question: How long does it typically take to purge with a purging compound? How much material is required?

Answer: Purge time is affected by several key factors including machine size, condition of screw and barrel, type of resins being purged and more. It also varies based on the type of purging compound used. For example, most chemical purges require soak time, while mechanical purges do not. Therefore, it’s difficult to predict how long a purging application could take. Just how much purging compound is required varies by the same factors. Some purging compounds recommend smaller quantities, but then require a second or third purge if contamination is severe. Most mechanical purges suggest one to three barrel capacities per purge. The important thing to remember is that whichever purging compound is used, it consistently reduces the amount of purge time required in comparison to most other purging methods.

Question: Are there certain steps to follow to ensure the best results when using a purging compound?

Answer: First and foremost, always start off by following the purging instructions and recommendations provided by the CPC supplier. Once you are comfortable with how the purging compound works,experiment with procedures and quantities until you find the purging “sweet spot” for your applications. That being said, most CPC suppliers have recommendations that help maximize the benefits of the purge. For example, ASACLEAN, a mechanical purging compound, recommends using maximum safe back pressure, maximum safe screw speeds and keeping the screw completely forward, both during purging and when displacing with the next resin. These steps help increase turbulence and agitation within the machine, which makes a mechanical purge more effective.