Home Articles Global Economy in a State of Flux (Again) 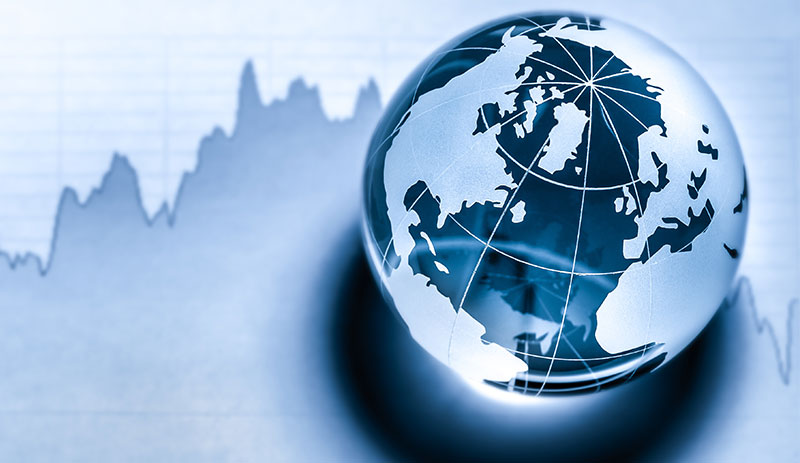 The International Monetary Fund certainly is not notorious for its upbeat forecasts. The institution began life after the Second World War as the lender of last resort – created primarily to give the shattered European nations an opportunity to rebuild their economies with borrowed money. It worked like a charm as these were mostly modern industrial states with the know-how and ability to compete once they had an opportunity to rebuild that shattered infrastructure. As that mission was completed, the IMF turned its attention to the developing world with the same basic plan – cheap loans to build infrastructure – but the outcome was not quite so positive as these states often lacked the background and skills to take advantage of this kind of support. Pretty soon, the IMF was the institution that set about correcting these bad habits through direct intervention – teams of IMF economists that virtually seized control of entire economies. This essentially set the IMF as the arbiter of good and bad economic policy, and its periodic reports on the state of the world are generally seen as very accurate – but they do tend to lean in a more negative direction.

The latest edition of the World Economic Report is characteristically blunt as it outlines the factors that have been dragging the global economy to the slowest period of growth seen in the last several years – nearly as slow as was seen during the recession that gripped the US, Europe and the world in general.

The report cites an “environment of increased trade tensions and tariff hikes between the US and China, a decline in business confidence, a tightening of financial condition and higher policy uncertainty across many economies.” More than in past years these are all man-made issues that have been made more serious by political positions and the growth of populism as a political/economic motivator.

This would seem to fly in the face of recent data collected in the US. The Q1 growth rate exceeded expectations with a reading of 3.2% when most were expecting no more than 2.5%. The US unemployment rate remains near record lows as it wavers between 3.8% and 4.0%. The level of capacity utilization has been getting close to the normal range, between 80% and 85%. With all this positive data, why is the IMF so bleak? And for that matter, why have there been equally downbeat projections from the World Bank and the Organization for Economic Cooperation and Development?

The growth expectation for trade now is for a rate of 3.4% in 2019 – and that is down from a previous estimate of 3.8% and way down from the nearly 5.0% that was notched in 2018. The growth spurt that was led by the US in 2018 faded quickly, and the corresponding surge in Europe was even more short-lived. The tax cuts in the US, coupled with additional European stimulus, provided an unsustainable boom – but from the start that surge was undermined by other policy decisions. For every step forward, there was a step or two back and the global economy ultimately started to falter. Growth estimates for the world economy are down by an average of 70% and almost every nation is looking at dramatic reductions in their GDP. Germany is expected to be down by 0.5%, Italy also is expected to be down by 0.6% and the UK will fall by another 0.3%. Mexico is down by 0.6% and all of Latin America is looking at around 0.7%, with big drops in Brazil and Argentina. The Middle East will see a decline of 0.9%. Even the once high-fl ying US economy will be coming back to earth with growth at perhaps 2.3%, as compared to the 3.2% noted at the start of 2019. The challenge is that some of the factors that sparked that high growth at the start of the year in the US are fragile and subject to major change. The two most important motivations for first-quarter growth were a surge in exports and a more active consumer than had been anticipated. The export surge only will continue if the rest of the world is in a position to buy the US output. The predicted slowdown in Asia and Europe and Latin America will affect demand for US exports, as the majority of what is sold by the US is high-value manufacturing.

Of the issues cited by the IMF, the ones that seem to be causing the most concern revolve around uncertainty – and this confusion is firmly rooted in politics. The erratic nature of US trade policy has been attributed to the fact that there is no real policy in place. Tariffs are imposed and then lifted. Threats are made and then they are not followed up with action, but then the threat reappears at the time that most assumed the issues had been resolved. The policy is directed entirely by the White House.

The agony of the Brexit process has taken everybody by surprise and has all but destroyed the British reputation in the world. It was assumed that cooler heads would prevail and an orderly and mutually acceptable deal would be thrashed out. Now the betting is that the UK will crash out of the EU in a chaotic mess that will set the economy back by years, taking a big chunk of Europe with it. At the same time that British isolationism and populism lead the UK toward this train wreck, there are similar elements in Europe with Italy at the forefront of populist crisis. The economy of Italy is in shambles and all the leadership can focus on is immigration.

The IMF is not very enthusiastic about the situation in Asia either. China has shown some signs of life of late as the manufacturing data has improved, but there still are major headwinds due to the trade fight with the US and the slowing economic growth in Europe – a market that is more important to them than even the US. Japan remains mired in slow growth patterns, and India has not been in a position to exploit the market opportunity that has been provided by China’s struggles. Latin America is at near panic level over the mess in Venezuela and the bombastic leadership in Brazil. The hope for Argentina has faded as old problems have come back to haunt and it now appears there is support to bring back disgraced former President Cristina Fernandez.

The US has been on the edge of a deal with the Chinese for many weeks, but it always seems to slip away at the last minute. The issues that once were seen as the most divisive have largely been worked out – issues such as intellectual property protection and forced technology transfer. The problem now is unwinding from the tariffs that have been imposed by both nations on the other. Which will be removed or reduced and in what order? Will some stay in place? This is part of that uncertainty situation again.

Oil has been a rapidly shifting business as well. For most of the last 50 to 60 years, there was one economic development that could generally be counted upon. Anything that spiked oil prices would inevitably lead to some kind of economic calamity. Higher priced oil would usher in a recession of one kind or another – and often this downturn was brutal and lasted a long time. The price of oil has jumped by around 45% in the last few weeks and has hit levels not seen in many months, but thus far reactions have been muted. The issues that have affected the oil markets would have turned the sector inside out a few years ago – production cuts from OPEC and Russia; political chaos in oil producing nations like Venezuela, Libya and Algeria; the imposition of new sanctions on Iran and those that buy oil from them. Any of these would have been expected to have an impact, but this time around the impact has been minor.

The reality is that US oil production has changed the rules. The production can expand more or less at will and oil markets assume the US will kick into high gear when those prices finally hit somewhere in the 80s. Beyond that, there is confidence that global growth is robust enough to sustain demand even if the prices approach $100 a barrel – at least for a while.

It often is asserted that the global economy is in flux, and it nearly always is to one degree or another. This time, that uncertainty is at maximum levels – and it serves to almost paralyze business decision making.