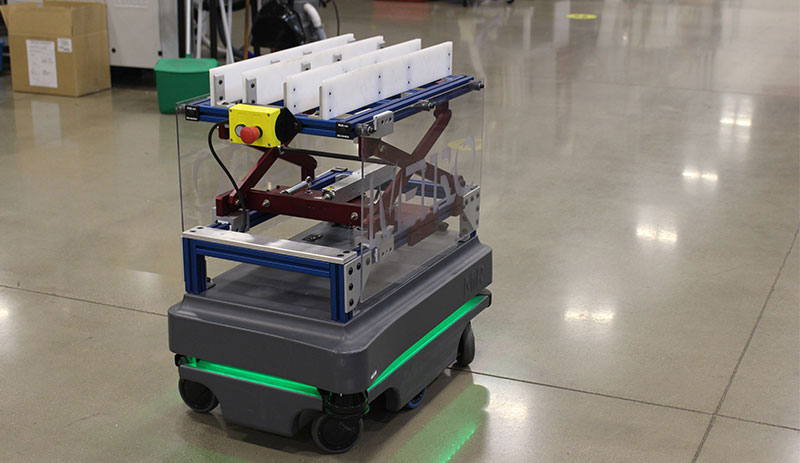 The new worker on the production floor at Metro Plastics is a real go-getter: punctual, tireless and precise. The Metro crew might be excused for resenting this new wunderkind. But, since the manufacturing area now is decluttered and quality inspection is taking place in record time, the crew at Metro Plastics instead cheers the newbie – a collaborative mobile robot nicknamed UBER.

Always on the lookout for ways to increase efficiency, the company saw room for improvement on the production floor. Since Metro Plastics specializes in high-volume and short-run jobs, its production area quickly became congested as pallets and boxes of completed products accumulated on the floor around each press.

Its quality inspector spent valuable time making regular trips from the warehouse to the production area to examine sample products in floor-level boxes at each workstation. And, the company’s small fleet of propane-powered fork trucks that moved finished products to the warehouse created traffic that was a safety risk to team members.

When the company decided to build a new 72,000-sq.-ft. facility, President Ken Hahn wanted to address the issue of moving products between the production fl oor and the warehouse. “Our original goal was to implement an AGV (automated guided vehicle) to move the finished product to the warehouse,” said Hahn.

This type of automation had intrigued Ken Hahn’s father, Lindsey, Metro Plastics’ founder, as far back as the 1990s. Lindsey Hahn had long envisioned using AGVs to improve efficiency on the production floor. An AGV methodology, however, had not been possible to incorporate into the company’s original building.

While puzzling over choices among AGVs for the new building, which required an investment in permanent supportive infrastructure as well as vehicles, Ken Hahn learned about an alternative for automating material transport: collaborative mobile robots (CMRs).

This option met all of the company’s needs and was squarely within the price range of the AGV solutions, and CMRs offered the advantage of being autonomous; they need no building-based infrastructure.

Ken Hahn jumped on this choice, and his father, Lindsey, unleashed his energy and decades of injection molding knowledge on envisioning the new facility. “Lindsey was instrumental in the building design and layout,” said Hahn of his father’s contribution.

Lindsey tapped his 40 years of injection molding experience, pairing it with his belief in the value of automation. “He designed the floor plan to maximize the benefits of a CMR,” Ken explained. “He dedicated more than 60 hours per week for 18 months to design, construction and move-in at the new facility, which took place in March of 2018.”

Metro Plastic’s UBER is a MiR200 robot from Mobile Industrial Robots Inc., a Danish company that was recently acquired by American company Teradyne.

The MiR200 is a compact wheeled platform with a low center of gravity for stability that can carry up to 500 pounds. While MiR robots can be fitted with a variety of interchangeable top modules – such as bins, conveyors and robotic arms – Hahn chose a simple waist-level rack.

Metro Plastics’ Project Coordinator Emma Morris handled implementation of the CMR. “We had to map our production floor using the MiR robot,” explained Morris. “It was as easy as driving the robot around using a cell phone as a joystick. The robot’s laser scanners detected the building’s walls and the solid objects, such as injection molding machines.”

With the floor plan mapped, Morris added the robot’s stopping points. “We wanted the robot to stop at each molding machine,” she said. “We drove the robot to specific positions on the floor and clicked on the map so that the robot created a position with precise coordinates.”

Next came the design of the robot’s pickup/delivery schedule.

“We set the robot up to do a simple loop of the floor every 10 minutes, stopping at each press machine for 20 seconds, so that an operator could add a box of finished products, before moving on to the next machine,” Morris said, adding, “We like a maximum of three boxes (or four) on the robot at a time.”

Once programmed, the robot was autonomous – making its rounds and stops independently.

In addition to “knowing” the facility’s layout, the robot’s sensors and cameras can detect people or obstacles to avoid collisions. To keep its battery charged, Metro Plastics’ CMR periodically retires to its charging station for a quick juice-up between its pickup/delivery cycles.

Through its use of the CMR, Metro Plastics has seen several improvements, including unexpected benefits.

UBER’s regular pickups at workstations have decluttered the production floor. The schedule of pickups and deliveries has allowed Metro Plastics to do away with the fork truck traffic that formerly transported the accumulated finished products to the warehouse. “Eliminating fork trucks from the floor has made the production area tremendously safer,” said Ken Hahn, “and this allows our workers to listen to music using ear pieces with no fear of being hit by a truck.”

In the past, Metro Plastics’ quality inspector walked between the warehouse and the production floor repeatedly to inspect sample items in boxes on the floor at each press. Now UBER collects boxes of fi nished products during the company’s 24/7 production schedule, with brief stops at each workstation and regular deliveries to the inspector in the warehouse.

Metro Plastics’ CMR racks up an average of 110 miles per month on its rounds. Those regular deliveries make for more frequent and thorough inspection opportunities, no longer limited to merely a sampling of products.

Hahn sees this as a tremendous, unexpected boon. “The giant benefit is that when a box is filled it goes directly to the quality department on its way to the warehouse,” he said. “We now are able to isolate problems to just one finished box and the partially filled box at the machine.”

Rapid defect discovery has led to problem resolution while jobs still are in progress. That, in turn, has led to less waste and scrap. And, in addition, the new system allows inspected products to be entered into the inventory system faster.

A culture of continuous improvement

Project Coordinator Morris notes that Metro Plastics makes occasional adjustments to the CMR’s programming. “As things on the floor change, such as machines being moved around, we have modified the robot’s map. This is as easy as opening the map and manually drawing an item on it,” said Morris.

She explained that the company has plans for maximizing UBER’s usefulness. “We are in the middle of implementing an on-call/on-demand feature at the press machines. Our robot will report to a workstation whenever an operator calls it (using an iPad).”

Hahn elaborated on the new plan, describing that the company will add robotic functionality at the presses to automatically fill boxes, a workstation-based system to allow the CMR to pick up filled boxes and automation to unload boxes at the quality department.

“This eliminates the manual loading and unloading of the robot,” said Hahn. “We could have purchased this additional automation from the robot supplier, but we decided to build the system internally.” Hahn’s impetus? “We believe this will lead to higher paying jobs and exciting opportunities.”

Metro Plastics considered various automation technologies for material transport before bringing a collaborative mobile robot into the workforce. With foresight, smart planning and the robot’s help, the company now has a tidy and safe production floor, speedy inspections that reduce waste and finished products that quickly enter its inventory stream.

Following the success that Metro Plastics has seen from the initial improvements in the production area, the company keeps looking forward for new ways to automate and improve its operation.