Quantum/M&M maintains an extensive customer base that includes major catalog organizations, material handling and distribution groups, consumer stores and outlets, window and door manufacturers, automotive, heating and air conditioning manufacturers, food service and medical supply, US Government, aerospace assembly and many others. The company footprint is over 1.3 million square feet which includes five manufacturing facilities with over 150,000 square feet of manufacturing floor space and is where they produce, in house, their extensive proprietary product lines and custom molded products.

Don Thomas, General Manager of Quantum, oversees the company’s manufacturing operations.  Over the past few years, the company has focused on ‘capacity growth’ (i.e. improving its molding output).  That included a commitment to update its fleet of injection molding machines.

“We looked at all of the major IMM brands,” said Thomas, “and made the decision to go with LS Mtron.  We’ve purchased 11 new LS Mtron machines over the past two years.  Five are up and running, two are currently being commissioned, and we wait for four new large machines for the end of this year into next.” 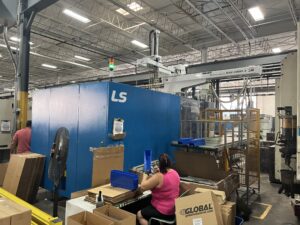 “I’ve been in the plastic industry a long time, and I can say that the quality of machinery coming from Asia has increased dramatically over the past 20 years,” said Thomas.  “We knew about LS Mtron and their reputation for high quality, and we liked that they are part of the LG/LS family of companies.  They are a solid company with a strong global presence.”

Adrian Gerardo, Quantum’s Plant Manager, had worked with LS Mtron Sales Engineer, Mitch Fournier, in the past, which led to Quantum reaching out to LS Mtron for a quote for new machinery.

Gerardo said that it is important at Quantum to maximize the use of their floor space and overall square footage, making sure that the real estate is utilized efficiently.  “We needed to maximize press size and tonnage, and were looking for machinery with a small footprint,” said Gerardo.  “The LS Mtron machines are significantly more compact and much more efficient than the older machines they’re replacing.”

Besides having a compact footprint, the LS Mtron machines were attractive to Quantum because they were available in 100 days or less.  “Fast deliveries are almost unheard of in the industry these days, with all of the supply chain disruptions,” said Thomas.  “LS Mtron told us they could have new machines to us in 100 days from casting to cargo out of their factory in South Korea.  LS also offered competitive pricing, which of course was important, but one of the biggest differences from other suppliers was that we could get these new machines quickly.”

Commitment to US Manufacturing

When Don Thomas joined Quantum in 2011, the US was just coming out of the major recession of 2008/2009.  “I have had experience running molding facilities all over North America,” he said.  “Quantum is a privately held, family-owned company and they had decided to invest in their USA business as opposed to being like so many others and moving manufacturing to Asia.  We didn’t want to be lemmings. We wanted to be leaders, not followers.”

With Thomas on board, Quantum expanded with new buildings and numerous new molding machines to begin the modernization process.  It wasn’t long before business rapidly grew, and the company began adding many employees. Quantum had under 200 employees in 2011.  It has over 400 today.

In addition to doing all its own molding in-house (Quantum has 58 IMM’s), Quantum does a lot of its own mold making, especially for the smaller parts produced under the M&M Plastics division.  The company has over 24,000 products and molds and continues to design and create new products.

“We produce a lot of parts here,” said Thomas.  “They include our own Quantum brand products and other custom products as well.”  Thomas estimates that Quantum/M&M molds and distributes an estimated 200 million parts/year of the totes, bins, and large and small manufacturing components for their Customers.

With the commissioning of the new LS Mtron machines, Quantum is well on its way to achieving its capacity and growth goals.  “LS Mtron’s Mitch Fournier did a great job getting the machines delivered and commissioned, and next up is training,” said Thomas.  “We’re very pleased with the performance of our new LS machines and the service we receive.”

ABOUT US
The Official Publication of Manufacturers Association for Plastics Processors
785.271.5801 | [email protected]
2150 SW Westport Dr., Suite 401, Topeka KS 66614
FOLLOW US
© 2022 - All Rights Reserved - Peterson Media Group
We utilize cookies to understand how you use this site and to improve your browsing experience. By continuing to use this site you are giving us your consent to use cookies in accordance with our privacy policy. OkPrivacy policy